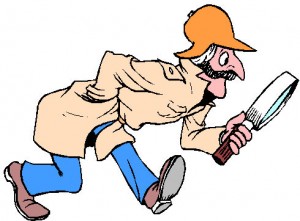 I’ve never done a virtual scavenger hunt before, but the idea sounded really cool so I thought I’d share it here and offer up an Amazon MP3 gift card or iTunes gift card. Winner’s choice :)

All of the items on the list relate in one way or another to the book, so you get can a little insight into my sources of inspiration for the story throughout the whole process.

Here’s how we play:

You don’t have to get all the clips right, but you do need to put something in there for your entry to count. I will be verifying every last one of them! With that, I STRONGLY suggest doing a bit of searching first, and then coming back to enter the contest. It’s running for a month, so you have plenty of time to track down clips and come back to put them in.

I have tracked down clips for all the questions on the hunt, so I know they exist! If it looks like people are having trouble finding the answers throughout the month, I may tweet or post additional hints on the blog to help everyone along.

After the contest ends, I’ll publish the clips to the blog and give some more background on the answers and why I selected my clips. Just for fun, I’ll post a few suggestions, based on the book and the hunt, of some music to buy with your gift card.

The winner will be selected based on whoever submits the highest number of answers/clips correctly (this applies to mandatory questions only). I’ll be lenient on the clips submitted, but you at least have to have the right movie/musician/actor.

In the event of a tie, I will choose a winner at random through Rafflecopter, or depending on how many entries are tied for first, I may do multiple prizes ;)

Scavenger Hunt Questions for Quiet on the Set

1. Rylie’s agent, Devon Sworella, is loosely based on another argumentative, volatile and hilariously un-politically correct Hollywood agent from an Emmy- and Golden Globe-winning primetime drama. Dev’s not quite as verbally abusive, but he does have a short fuse at times.

Find me a clip of this sharp-tongued talent agent in action.

2. Rylie’s friend in the book, Karen Linnell, got her name from two different sources of inspiration. The first, Karen, is actually based on a character from a popular film from the mid-90s. The character in the movie is also an actress, and the movie is about the making of a movie. The film is based on a book by one of my favorite authors. (HINT: My Goodreads “Read” shelf might be a good place to start to figure that one out).

Find a clip of this movie’s Karen in action (trailer works, too).

3. I tend to watch movies when I write, and one in particular served as fodder for my imagination while I wrote Quiet on the Set. It’s a little artsy in terms of the storytelling, but I loved it. It only has four main characters, and one of them is not quite who she pretends to be.

Hints on the actors in the main roles: the actor who plays the main character, Matthew, was a soldier more than once, a hitman, a Catholic wagerer, and a cop who wanted to be an actor. The female lead has played a US history buff, a WWII German actress, the most beautiful woman in all the world, and she has a new regular series coming this summer in which she plays a detective.

Find me the trailer or a clip from this film.

4. A film about a historical person: an innovator, a filmmaker, a nutjob, and a pilot. While I didn’t take much from this character, I did borrow a line from the film and I fictionalized the film’s director as a character in my own story. If the first line didn’t give it away, I don’t know what will.

Find me a clip of the main character with one of his great lines in the movie.

5. I mentioned earlier that I created Karen’s name from two sources. The second source for her last name, Linnell, is actually the oldest one on this list. The film features two actors, a man and woman, who often made movies together, though this is one they are less known for. The name “Linnell” comes from the protagonist’s new name after he goes on the run. HINT: the film starts out shot entirely from the first person point of view of the protagonist, quite a gamble for a film of that era (it is in B&W).

6. One of the main characters in Quiet on the Set, Shane Norther, is based on a fictionalized version of a modern Hollywood actor. In the book, Rylie makes (vague) reference to a couple recent films that the actor was in. These films include a “robot” movie, and a “space travel” movie, aka “the top grossing film of the decade”.

The robot movie that this actor was in was actually the fourth of a film franchise that dates back to 1984! The space travel movie has less to do with the travel and more to do with the destination, but visually, it was unlike anything movie-goers had ever seen. Very effects-heavy, but incredible to look at.

If you look closely, you may be able to get a clue from the name “Shane Norther,” as it sounds a little like that of the actor in question.

Find me a clip (or an interview) of the actor from either film.

7. Later in the book, Rylie goes on a date to a fictional movie theater that only shows old classic films, appropriately dubbed “The Golden Age Theater.” Of a choice between Mildred Pierce and another film with a Biblical name, Rylie decides on the latter, emphasizing her preference for Bette Davis over Joan Crawford.

Find me a clip from that second movie!

8. I didn’t know this musician when I started writing Quiet on the Set, but I discovered him while I was in the editing process. He’s been around for a few years making music in Britain, but he’s just now starting to make a splash on the American folk/punk rock music scene. (Just found out he’s playing a gig in my neck of the woods this October!) One of his newest songs was the source for the title of Chapter Seven in my book. (Hint: if you take another look at the book description, you may be able to connect the obstacle Rylie encounters in Chapter 7 with this song.)

Find me the music video for his new single! (I dare you not to love it.)

Want to post this contest on your site? Feel free! Get the embed code here:

For instance Xylocaine causes numbness in an area of your body. Given during childbirth. Secondly treats emergency heart problems. There were only couple of examples. What is the most significant info you should know about canadian viagra? A lot of patients know this drug as Sildenafil. Whereas erectile dysfunction is more common in men over sixty, men of any age can unable to have an erection. Notwithstanding sex is not vital for good health, it’s undoubtedly good for you. Diabetes can lead to erectile dysfunction. While the generic is credited with nerve hurt, it can also kill the mood in bedroom. Very likely you already heard that any generic has side effects.