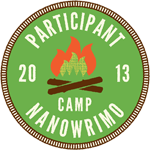 Two weeks gone! Holy hell. I had absolutely no intention of having my site inaccessible for nearly two whole weeks, but my stupid domain/hosting transfer took a lot longer than I expected. But it’s (mostly) done now, so now I just have to get back to posting regularly.

Though I haven’t been posting on this blog, I’ve been plenty busy. I FINALLY wrapped up my project from April’s Camp Nano event last week (four days later than I meant to), and I started my new project for July Camp. So far, it’s going pretty well. I didn’t start until last Saturday (7/6), and I’m up to about 8,400 words. It’s actually a lot of fun, but I’m slogging through the backstory and exposition right now, so it’s frustrating getting that stuff out before I can jump into the meaty part of the story.

My last story was an international drama/thriller that takes place in London, UK and various locations in India. I was happy to finish it, but if I ever want to do anything else with it, as usual, it’s going to need some serious work. I switched perspectives every chapter primarily between the three main characters and occasionally with a secondary character, and while I think it was a good plan in the long run, it’s going to need some refining.

Some of the chapters are a little too summation-y, and I definitely need to flesh out the evolution of each of the main characters better. Some parts are very action-based, others are very narration-based, and still others are inner-monologue/character-based. That all needs to be balanced better among each character’s chapter trajectory.

I was a little disappointed with the ending as I wrote it, actually. The one I was so excited about and thought was going to be awesome. It didn’t feel as surprising or poignant as I was hoping it would be, but maybe that’s because I knew it was going to happen. I think it is still the right way to end the book, but I think that’s probably where the most time and energy is going to have to go if I want to make it better.

The Haps on the new project for July Camp

I am totally into this new story. I was a little concerned I might be burned out on writing after editing Quiet on the Set, jumping right into a new writing project for April Camp, and then only a day off before starting the July Camp project. I haven’t hit any blocks so far, but it is a little rough waiting to get to the main story while I’m hammering out the backstory – it isn’t really flashback, but it takes place several years before the main plot.

Part of the reason I think it’s been so easy to get into this new story is some of it’s from my own life. Some of the characters are LOOSELY based on people I’ve known, and the plot is sort of a Twilight Zone, what if this had happened, how would my own life have played out differently?

But, my main character, as usual, is very different from me. She’s way cooler, for one thing, and she has no censor button, for anyone, which I love. I have developed a censor for myself because I still care what people think of me. I like some people (my elders, and young children) to think of me as the nice, smart, girl-next-door type, so I censor myself. Other people (mostly people my age) get to see me as the potty-mouthed, over-achieving, film addicted, OCD nerd I actually am.

It’s an interesting path to walk, watching this character play out a life that is similar to mine in some ways and drastically different in other ways. For one thing, she has a kid. For another, she lives in California. Her lifestyle seems really admirable, even enviable, in some ways, but she’s got her own problems, just like the rest of us. Right now, she’s on the verge of a nervous breakdown, and I’m a little nervous myself trying to describe that.

I deal with anxiety, stress, fear – I think we can all relate to those things at one time or another – but I don’t know if any of my experiences with those feelings is in any way comparable to the kind of stress my character is experiencing. Apparently my characterization of Rylie’s issues with alcohol in Quiet on the Set were “comical” to one reader/reviewer, so having that feedback on my mind while I’m trying to write another character with a different psychological issue is really intimidating. (I say psychological because addiction and anxiety are psychological to me, but I’m a writer, not a shrink, so I could be wrong.)

In any case, despite my fears and feelings of inadequacy as a writer, I’m still totally into this story, and I’m really looking forward to the “main” part of the story. The part that takes place at present day, and the good-looking second protagonist I’m going to introduce when I get there :D

Any editing on the horizon? (i.e. any plans for a new book?)

Aside from that, I still haven’t made up my mind which one I want to work on, and I’ve got to corral/coerce/entreat some beta readers. I really need some sci-fi fans for the next editing project (I’ve got futuristic neurology/spy stuff in one corner and aliens in outer space in the other), so if you or someone you know is interested in doing a little extracurricular reading, contact me.

Plus, it’ll be a while before I have the cabbage for professional editing. Has anyone used Kickstarter, Indie GoGo, Pubslush, or any other crowdfunding sites to come up with the funds  needed for editing/publishing?

Leave me a comment below, or send me a message.
I’d love to hear more about your experiences with it!

If you haven’t checked out the new contest, it’s a scavenger hunt with a Rafflecopter giveaway!

For instance Xylocaine causes numbness in an area of your body. Given during childbirth. Secondly treats emergency heart problems. There were only couple of examples. What is the most significant information you should know about canadian viagra? A lot of patients know this drug as Sildenafil. Whereas erectile dysfunction is more common in men over sixty, men of any age can unable to have an erection. Notwithstanding sex is not vital for good health, it’s undoubtedly good for you. Diabetes can lead to erectile dysfunction. While the generic is credited with nerve pain, it can also kill the mood in bedroom. Very likely you already heard that any generic has side effects.