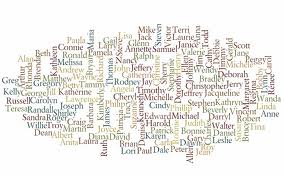 One of the first things, and in my opinion, the funnest, you get to do when you start a new story is pick names for your characters. They can be goofy names or poetic names or boring names, depending on who the character is and what their personality is like. A lot of my characters have unique names, but sometimes, I just pick them because it’s a name I’ve never used before and have been wanting to use it.

With A 21st Century Fairy Tale, I didn’t just spend the time going through names and picking ones I liked. This time, I chose names that actually meant something to the personality and background of each character. For example, “Dax” means “soldier” or “warrior”–appropriate for the war veteran. “Veda” is from the Sanskrit, and it actually means “knowledge,” which is rather fitting for a researcher. Who knew, right?

One of the most difficult ones to choose was that of LaMont’s new arrival–Garin Lel Casimir. Not speaking any Eastern European languages, I tried to choose a name that might easily be  found in several areas of that region of the world. Slavic is a root language, and so parts of his name are Slavic in origin, but part of the storyline involves him being of Armenian descent, so I also chose an Armenian name.

However, the meaningful portion of the name comes in the second and third names, “Lel” and “Casimir.” I didn’t want to choose anything too obvious for an antagonist–for example, “Voldemort” in Harry Potter is French meaning something along the lines of “flight of death”. No offense to J.K. Rowling, but to people who speak French, that particular name was a little obvious that he’s the evildoer.

Since I’m guessing that most of my readers probably don’t speak any Slavic languages, “Lel,” meaning “taker” and “Casimir,” “destroyer of peace”, seemed pretty appropriate and sound somewhat ominous even if the average person wouldn’t know what they meant without looking them up.

Choosing names for your characters is an important part of the writing process. You not only have to choose names that fit the characters, but you also have to choose ones that will fit the flow of the story. If you’re tripping over a name that’s hard to spell or it ends up sounding strange in the context of the story, you might need to rename somebody in the middle of the book. Not every character has to have a name that means something linguistically or historically, but every character’s name needs to mean something to you and to the reader.

For instance Xylocaine causes numbness in an area of your body. Given during childbirth. Secondly treats emergency heart problems. There were only couple of examples. What is the most significant info you should know about canadian viagra? A lot of patients know this drug as Sildenafil. Whereas erectile malfunction is more common in men over sixty, men of any age can unable to have an erection. Notwithstanding sex is not vital for good health, it’s undoubtedly good for you. Diabetes can lead to erectile dysfunction. While the generic is credited with nerve hurt, it can also kill the mood in bedroom. Very likely you already heard that any generic has side effects.